Burma was under a military government control since 1962. No foreign activities were allowed in the country during that time. For 18 years we prayed for Burma and during that time we organized several Bible Schools for Burmese refugees who had settled in India. In 2010 the Iron Curtain fell and Burma opened for the Gospel. The country changed its name and became Myanmar. 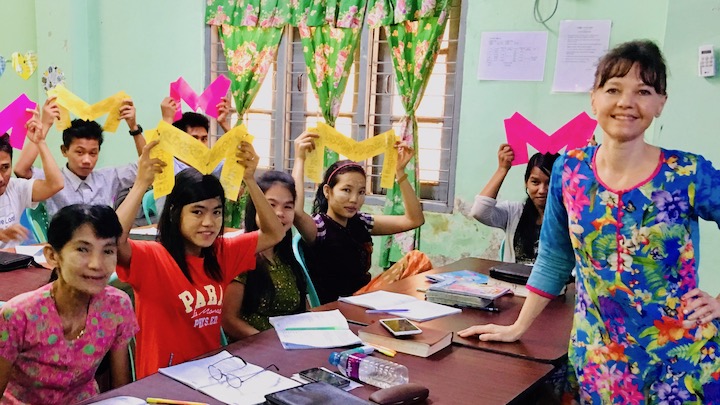 In the year 2018 we went to Myanmar and organized our first Bible School for 24 students. While the school was operating, God supernaturally healed our Burmese interpreter. We could see something was wrong with him. The man is of a short stature. From time to time, he would sit down on a chair, and then the students couldn’t see him, only hearing his voice. Then he would get up, but after a while, he would sit down again. We thought, “Bik adopted 8 children and takes care of them every day. He works hard on the fields growing corn, tomatoes, and cucumbers. It looks like his legs are very sore”. 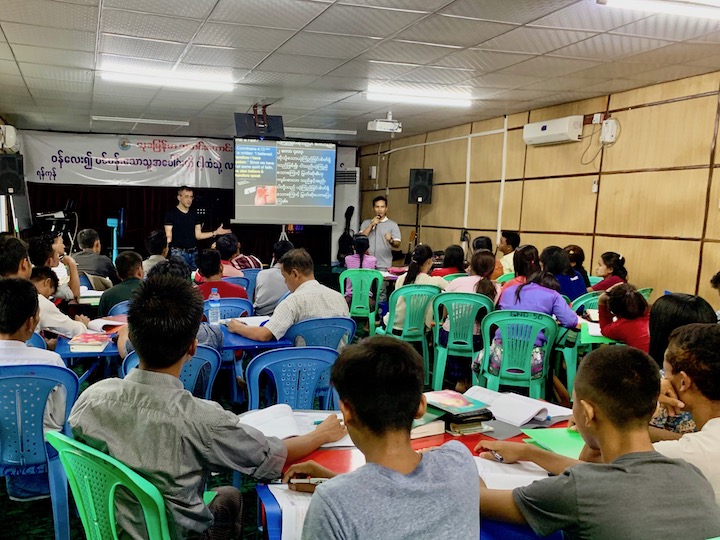 We train new ministers in Myanmar

Next day Bik looked terrible. He sat on the chair and interpreted our message. Suddenly he jumped up and started walking normally. Later, he explained what happened, “Three years ago I started having severe health problems. Every day I suffered from dizziness and heartache. Sometimes I felt so sick, I was not able to get out of bed. During the Bible School, I became even weaker. I was afraid I was going to collapse on the floor.” Then Bik continued, “I knew it was impossible for me to work as an interpreter for 3 weeks. But when I heard your message about faith, something happened. Suddenly, I felt so much energy! Dizziness and heartache were gone. God set me free from my sickness. Now I am completely healed!” The Lord is my strength; he makes my feet like the feet of a deer, he enables me to tread on the heights! 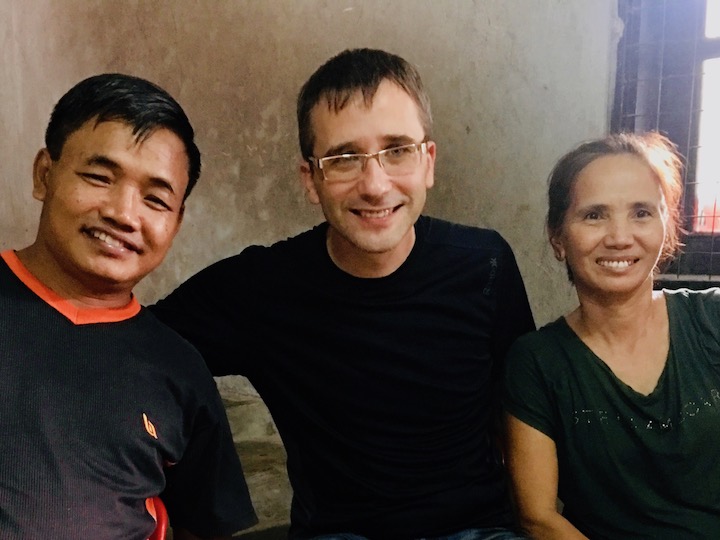 While the school was operating, God supernaturally healed our Burmese interpreter

Christians are being slaughtered in Myanmar, but the world doesn’t know about this. The churches are being bulldozed and replaced with Buddhist temples, but headlines are silent about this. If you go to Myanmar and ask local Christians, you will find out what really is happening. Pastor U Tin Shwe was one of the students at our Bible School. He was persecuted and almost killed. The Buddhists destroyed his church and burned houses of Christians from his church. Here is how it happened. Pastor U Tin Shwe ministers in Rakhine, one of the states of Myanmar. After a Sunday service, a crowd of Buddhists gathered around his church and started shouting, “Go away from here along with your God!” People were punching the pastor, pushing him and spitting on him. He had to run away, but after a while, he felt God was calling him back to this village to share the message of God’s love with these people.

The villagers heard that the pastor was back, and they started gathering around the church. They were carrying sticks, shovels, and hacks. The mob kept growing and growing. Pastor U Tin Shwe heard the noise and saw how the angry mob was pouring into the church. They surrounded him and he could see faces of people whom he had helped many times. Suddenly he felt that something hit him on his head and he fell down unconscious. Pastor’s friends saw how someone hit him on his head and they thought he got killed. He had a severe headache and the blood was gushing on the ground. The attackers hit him with a shovel or a hack. After a while, he came back to his senses and opened his eyes. He was unable to understand where he was, and why people were standing around him crying. Pastor U Tin Shwe tried to get up, but he felt very dizzy and was not able to walk.

The police arrived at the scene. They were laughing, “Hey, where is your God? Why didn’t he save you?” Only after eight hours was the pastor brought to a local clinic. Doctors provided him with minimal care, and they didn’t allow him to stay at the clinic. Christians ran away from that village to a neighboring place. And with great difficulty, U Tin Shwe was transported there. The following day believers put him on a plane and he was brought to Yangon. But even there no government clinic provided medical care to him. There was only one private hospital that agreed to accept a Christian pastor. 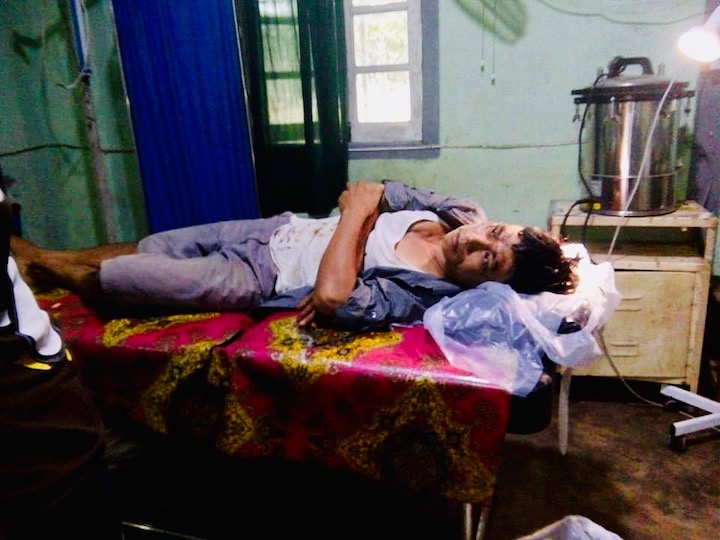 Doctors provided the pastor with minimal care, and they didn’t allow him to stay at the clinic

Finally, medical help was provided and a CT scan was done. During this whole time, we were praying for the pastor. Three days after admission to the hospital, U Tin Shwe walked into our Bible class. His face was still severely bruised, but he was smiling, and thanking God for bringing him back to life. The mob not only tried to kill him, but they destroyed his motorbike, phone, and other possessions. We pray, and forgive the attackers, for they don’t know what they are doing.

Fox News reported, “During the last 5 months in Kachin State Burmese army and Buddhist fanatics bulldozed 60 churches and replaced them with Buddhist temples. They killed, raped and forced Christians to go to the minefields in front of their military troops”. Can you hear their cry? The Burmese army has been recruiting boys from poor families for many decades. Some soldiers are only 13 years old. The recruiters promise food, money, and benefits for the families. That is why children leave rice fields and join the army.

Think about it for a moment, these boys are not going to school. They put on a uniform, take guns and join the army. There are military camps in the jungle where boys are trained to fight with the militants. They go through the bootcamp, they cook for older soldiers and wash their clothes. Burmese people are not very tall, and sometimes a gun is taller than a child soldier. After a few months of training, these boys know how to treat wounds, install mines and attack villages.

Children become soldiers. They grow up too quickly and start drinking at a very young age. They lose their friends in battles and hate their enemies. They become fanatics who believe that in order to survive you must kill. Children attack and kill the militants, who are fighting for independence of their states. But the militants do the same. They also recruit children from village families. Children and killing children. Yet, from June to October the civil war stops because the rainy season comes and roads turn into mud.

In 2014, after many years of efforts with the help of the UN, the Myanmar army released 109 child soldiers, back to their villages. Finally, the change has started! There is no public information, but according to the unofficial information from international humanitarian organizations, there are still thousands of children in the Burmese army. And no one knows how many children were recruited by the militants.

Lal Boy was born in Myanmar in a Christian family, but now he lives in Delhi, the capital of India. He was our interpreter when we organized Bible Schools for Burmese refugees in Delhi. He shared, “My village was destroyed by soldiers three times. They burned our homes, emptied our fields and took all the men including children to forced labor. For many months we had to travel with the soldiers and carry their ammunition. And this happened three times!” Then he continued, “When we heard that the army was coming again, for the fourth time, we decided to flee from Burma to India. Eight years ago we became refugees. Our other neighbors made rafts and fled to Bangladesh across the river. Others fled to Malaysia”. 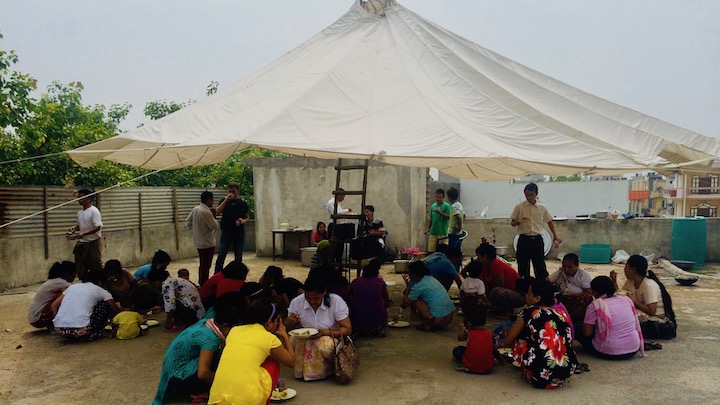 From 1962 through 2011 Burma was ruled by the military government. All borders were closed and the country was isolated from the outside world. The generals were building communism and torturing their own people. Our friends say, “Now the Iron Curtain collapsed, and freedom has come to Myanmar. It’s not complete freedom yet, but in big cities, it is possible to openly speak about Jesus now and invite people to church”.

The Lord has opened the door to Myanmar. Let us use this opportunity and bring the Gospel to this nation. Support our ministry in Myanmar. The harvest is plentiful, but the workers are few. Ask the Lord of the harvest, therefore, to send out workers into his harvest field. (Luke 10: 2)